#TimeToTalkAboutHPV towards a cervical cancer-free Philippines

#TimeToTalkAboutHPV towards a cervical cancer-free Philippines

Share Tweet
“Let’s stop spreading fake news. We should stop spreading misinformation that cervical cancer immediately means a death sentence – it is not!” 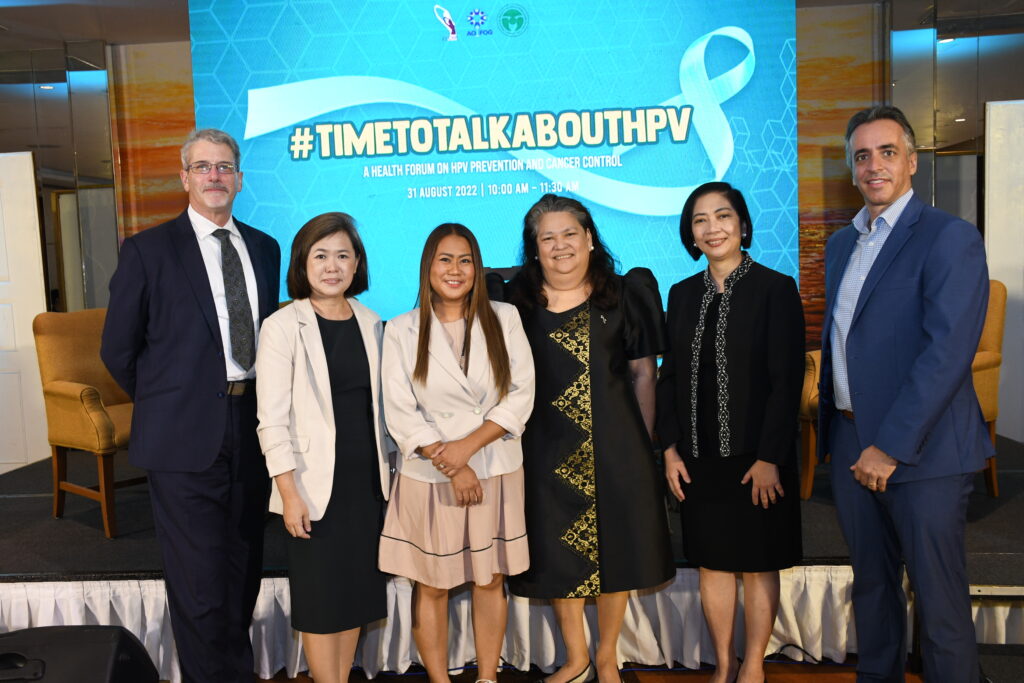 This is the appeal of the panel of doctors and patient advocates who spearheaded the freshly held health talk on cervical cancer titled #TimeToTalkAboutHPV: A health forum on HPV prevention and cancer control. Organized by the Cervical Cancer Prevention Network of the Philippines (CECAP), together with the Asia & Oceania Federation of Obstetrics & Gynecology (AOFOG), the Philippine Obstetrical and Gynecological Society (POGS), and MSD in the Philippines, the media forum aims to serve as a reminder that cervical cancer is preventable with regular screening tests and the HPV vaccination. 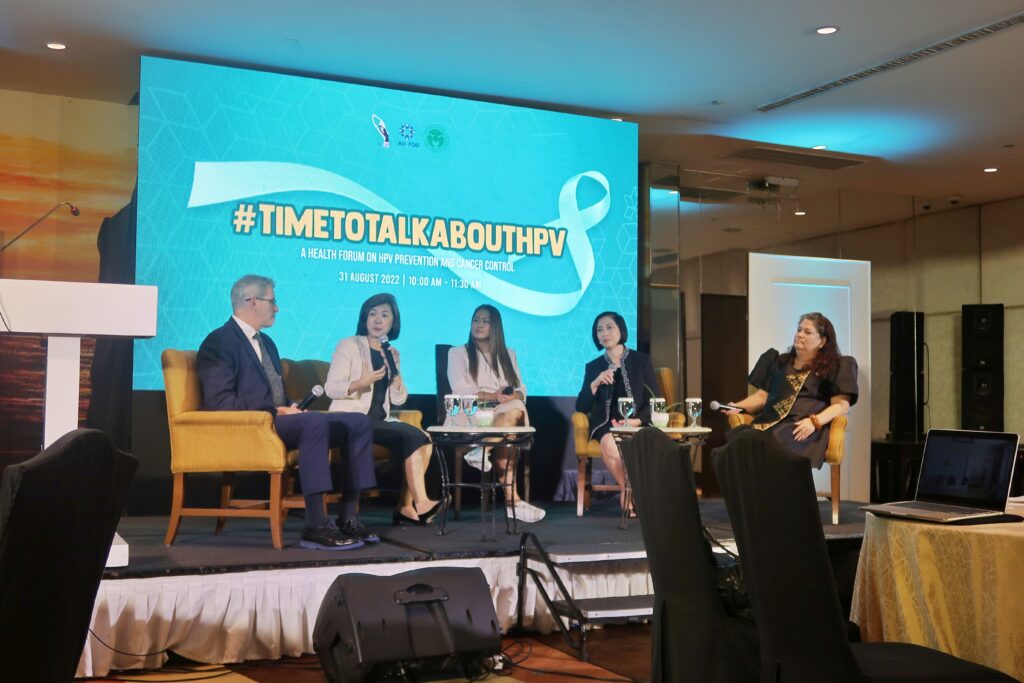 Cervical cancer is largely preventable through vaccination and screening for precursor lesions (pap smear at least every three years and HPV DNA testing for women starting at age 30), with appropriate follow-up and treatment. With access to accurate information, preventive services, and routine gynecological care, most cases can be prevented and successfully treated early.
Despite this, cervical cancer ranks as the 2nd most frequent cancer among women in the Philippines and the 2nd most frequent cancer among women between 15 and 44 years of age. Current estimates indicate that 7,897 women are diagnosed with cervical cancer every year and 4,052 die from the disease.
Cervical cancer develops at the entrance to the uterus from the vagina and around 99 percent of the cases are linked to HPV or human papillomaviruses. Modes of transmission include sexual contact, skin-to-skin contact, and rarely, through objects exposed to the virus.
It’s a highly-treatable disease if detected at its early stages. The precancerous stage provides ample window for detection and treatment, and it could take as long as 30 years before it reaches malignancy. However, it is one of the most common types of cancer and  common cause of cancer-related deaths worldwide, affecting mostly young, uneducated women from poor countries.
But more recently, COVID-19 has taken a toll on women’s health as studies have shown a gap in missed routine preventative exams and screening visits. “I think the world has been focused on Covid for the past 2 ½ years and we have overlooked other health concerns,” said Dr. Anna Lisa Ong-Lim, professor and chief of infectious and tropical disease division in Pediatrics University of UP Manila College of Medicine. “It is only recently when vulnerabilities to vaccine-preventable diseases are being noticed once again.”

Things you need to know about HPV

One life-altering issue that deserves focus is the huge burden that threatens women and men, including teenagers worldwide, caused by the human papillomavirus (HPV). “HPV is a virus that causes a wide range of diseases,” said MSD executive director of medical affairs for vaccines and infectious disease Dr. Mel Kohn.
“Apart from cervical cancer, the 2nd leading cancer for Filipinas, HPV can give men head and neck cancer, anal cancer for both sexes and a variety of less common but also devastating kinds of cancers,” he enumerated. Examples are vaginal and vulvar cancers and penile cancer.
“Genital warts, while it doesn’t kill you, can be quite devastating,” said Dr. Kohn. “It is quite common and very difficult to eradicate. Imagine the psychological toll on the patient. Again, prevention is the best approach here.”
HPV is common. It is passed from one person to another during sexual contact. “It’s a quiet epidemic unlike COVID,” he warned. Unlike the measles with obvious expression, “you don’t immediately see it when you meet somebody but it’s there and has been growing rather insidiously.” 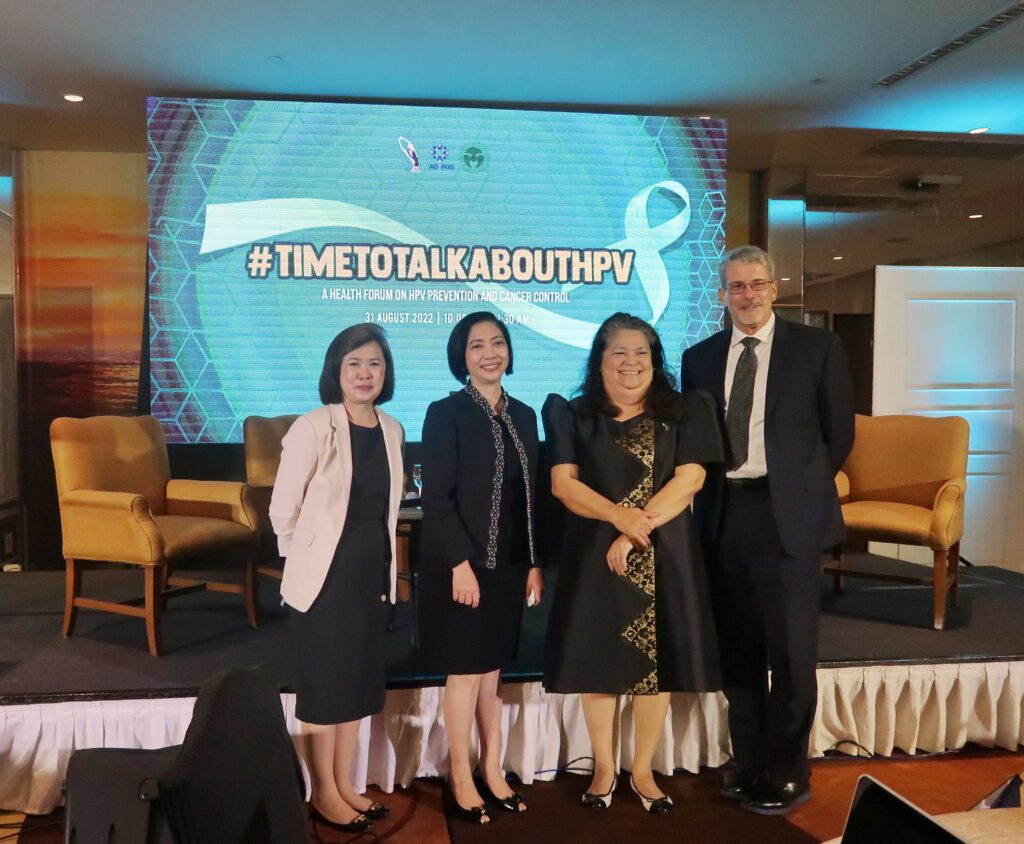 The Philippines has a population of 37.8 million women ages 15 years and older at risk of developing cervical cancer. About 2.9% of women in the general population are estimated to harbor cervical HPV-16/18 infection at a given time, and 58.6% of invasive cervical cancers are attributed to HPVs 16 or 18.
Although some infections from this commonly occurring virus with more than 100 types usually go away on their own, at least 14 types of HPV are cancer-causing.
The age indication for HPV vaccines is as young as nine years old for both girls and boys. Teens and young adults through age 26 years who didn’t start or finish the HPV vaccine series also should have HPV vaccination. Women up to age 45 may be eligible for vaccination after discussing it with their provider. 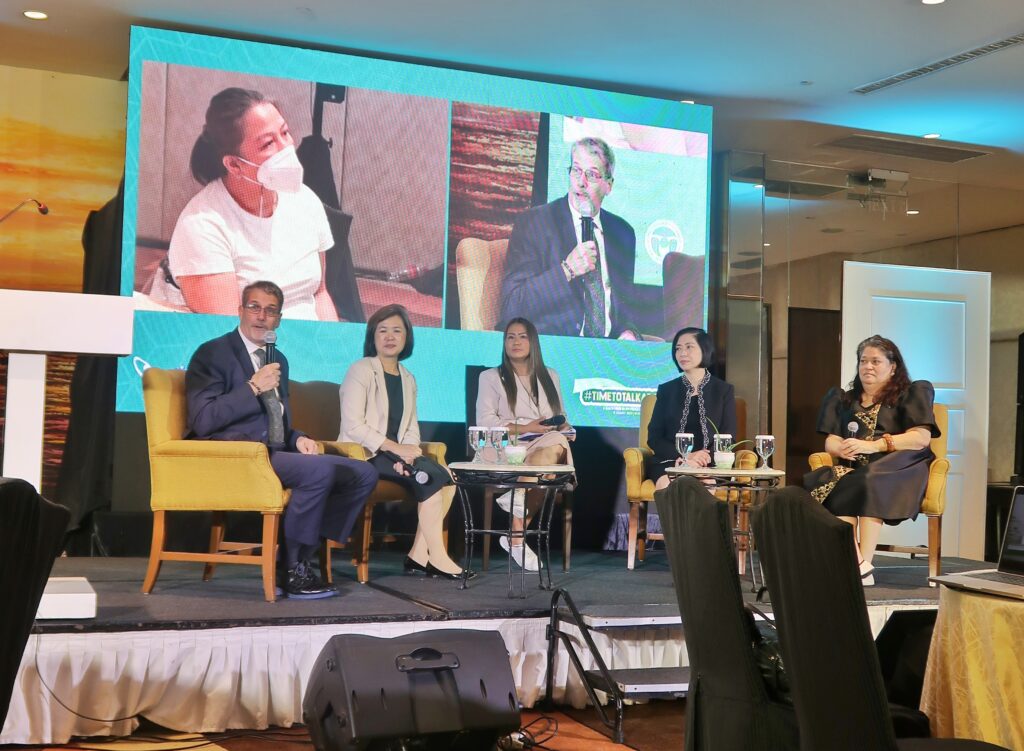 According to Dr. Ong-Lim, they target the young because of their increased susceptibility to infections.
“That particular age group demonstrates optimal immune response. Also, only two doses are needed to achieve protection,” she shared.
But more importantly, giving the vaccine at a younger age ensures they are already protected before becoming sexually active. “HPV vaccines work best when given before exposure to the virus. We must try to catch that window when the immune system responds very well to it,” Dr. Ong-Lim explained.
Manila Declaration: Call to Action Against Cervical Cancer chair and practicing OB-Gynecologist Dr. Jean Anne Toral mentioned that the young and adult fertility study done recently, indicates that the average age Filipina women become sexually active is 18.2 years old. “Giving the vaccine at age 9-15 would be beneficial as there is no life event that exactly pinpoints exposure to HPV apart from age of sexual debut,” she said.
There will be seven to eight out of 10 women who would be exposed to HPV at one point in their life, “But not all women will develop cervical cancer,” Dr. Toral assured. The probability of HPV exposure developing into cancer increases if a patient smokes is exposed to other sexually-transmitted diseases and has HIV.

As part of the government’s effort to protect children and adolescents from vaccine-preventable diseases, the Department of Health and partner agencies roll out the School-Based Immunization (SBI) Program. 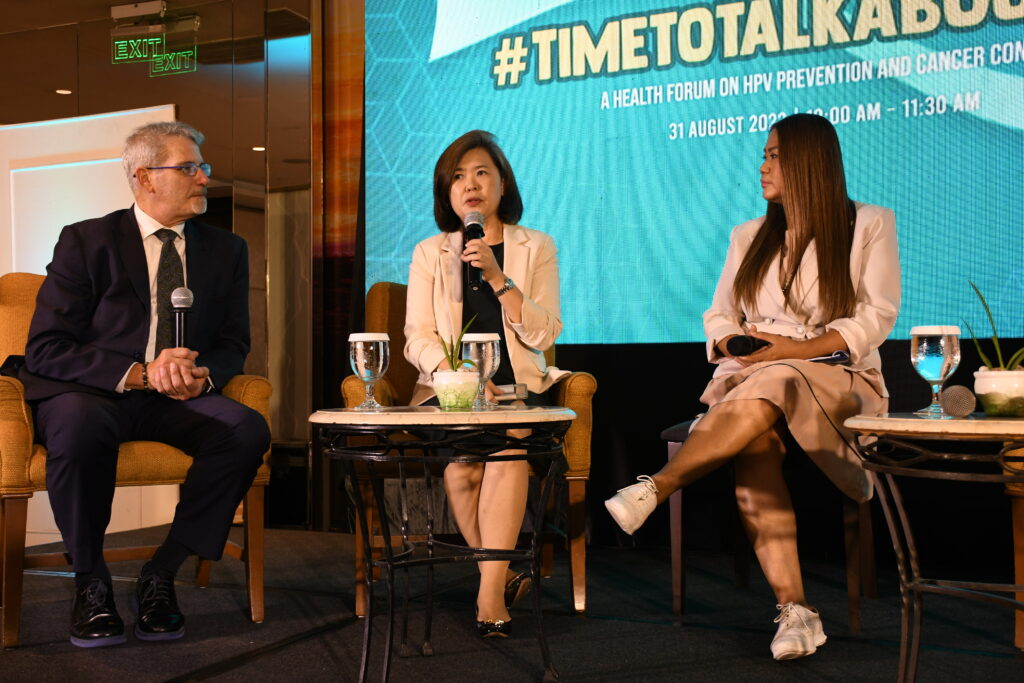 The SBI Program includes measles, rubella, tetanus, diphtheria (MR-TD), and human papillomavirus (HPV) vaccines administered to eligible students in public elementary schools. The inclusion of HPV vaccination in the SBI Program aims to protect young women from cervical cancer later in life, among other diseases associated with HPV.
Under the DOH’s SBI Program, HPV vaccination is given to grade 4 based on DOH’s recommended age group to receive the two doses of the HPV vaccine, six months apart, for protection against cervical cancer.
Before administering the vaccine, parents’ consent must first be obtained by school officials. That is why vaccination education campaigns usually highlight parents’ role in fortifying their children’s health shield through timely vaccination against diseases.
Due to the COVID-19 pandemic, the HPV vaccination, formerly delivered through the SBI Program, is now being shifted as part of the Community-based Immunization to still deliver HPV vaccination to young girls amidst the pandemic to protect them against cervical cancer and other HPV-related diseases and cancers.

Towards a cervical cancer-free future

The elimination of cervical cancer has been defined as achieving an incidence rate low enough for the disease to be considered controlled as a public-health problem; this threshold has been defined by the WHO as fewer than 4 cases per 100,000 women per year. 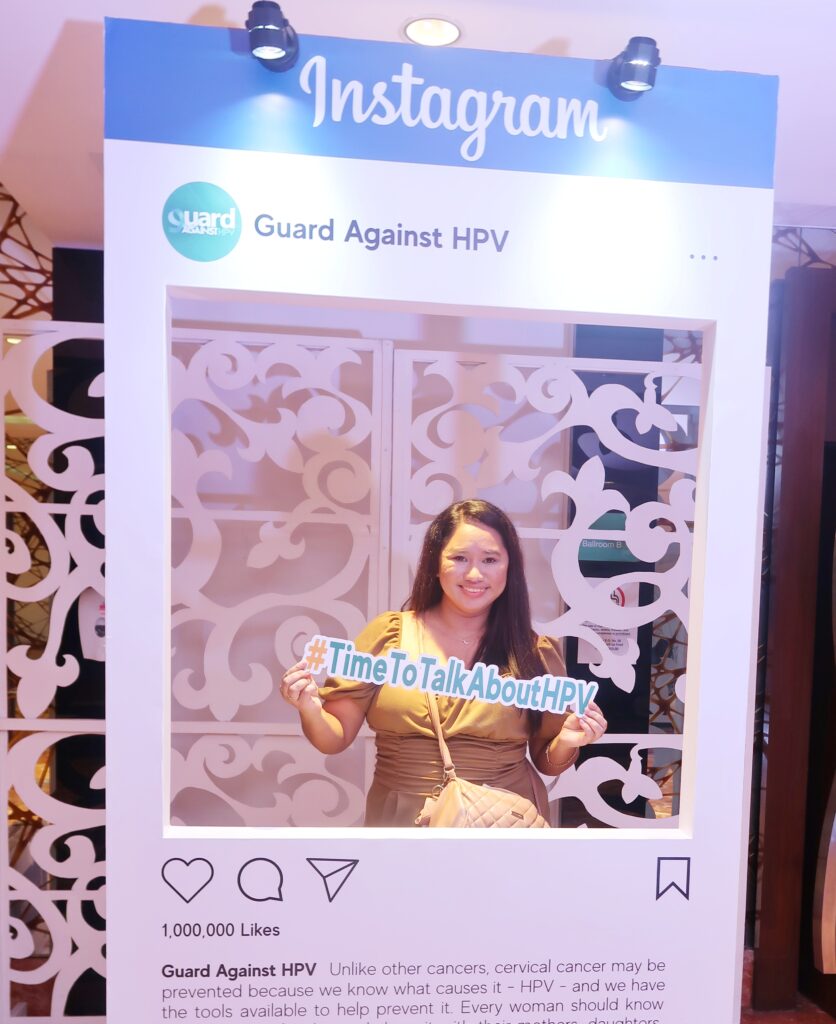 To accomplish this, every country must reach and maintain three key targets, within the lifetime of today’s young generation. The first is for 90 per cent of girls to be fully vaccinated against the human papillomavirus (HPV) by the age of 15. The second is to ensure that 70 per cent of women are screened using a high-performance test by the age of 35, and again by age 45. The final target is for 90 per cent of women with pre-cancer to receive treatment and for 90 per cent of women with invasive cancer to have their condition properly managed.
Achieving this vision and each elimination target will require a whole-of-society and multisectoral approach to ensure health systems prioritize women and girls. Individuals, families, communities, , civil society, and government agencies at all levels have a role to play in championing greater awareness, education, and social support.
Carmen Auste, Chief Executive Officer of Cancer Warriors Foundation Inc. said that the Philippines is among the countries that declared commitment together with WHO to eradicate cervical cancer in the country by 2040, and by 2030 worldwide. “There is already one type of cancer we can delete or ‘block’ like social media,” she humored. “To attain that goal, we must augment HPV vaccine uptake and educate the Filipinos on HPV, vaccines, and cancers caused by HPV,” she said.
Auste mentioned SUCCESS (‘Scale-up Cervical Cancer Elimination with Secondary prevention Strategy’) project as one of the advocacies recently launched in selected barangays. Led by Expertise France and delivered in collaboration with Jhpiego and Union for International Cancer Control (UICC) in support of WHO, the project aims to deploy innovative solutions to fight cervical cancer in four countries, including the Philippines.
At this critical juncture, we must empower women and rally our neighbors, community leaders, and governments to take action and save thousands of lives. If widespread, high coverage of these interventions can be achieved by 2030 and maintained, research predicts cervical cancer can be eliminated in most countries globally by 2120—avoiding over 63 million deaths of women globally.
Together, let’s commit to women everywhere to end cervical cancer.